skip to main | skip to sidebar

Thank you very much for everything you do to defend authors' copyrights against copyright infringement. We very much appreciate having an address to which to send our complaints, and the comfort of knowing that you compile a database of the most egregious "pirates" and pirate sites.


Despite small triumphs, ignorance persists among honest readers; lies about the legality of "sharing" go unchallenged, and the problem is getting much worse.

Please Scott Turow, Allison Kelley, John Scalzi will you talk to one another, set up one powerhouse task force, meet regularly, share resources, engage your members, give authors one central "Go To" address where we can submit complaints, report piracy sites, blogs and yahoogroups, cc our individual take-down notices.

One forceful industry voice could shut down an entire account and insist on a hosting site complying with their own TOS where their TOS has been repeatedly violated, instead of individual authors taking down one file at a time.

Posted by Rowena Cherry at 7:14 AM No comments:

Blogs are supposed to be a quick read, a flip-through-the-web and browse experience.

So lately topics are being separated into different blogs so you can subscribe or follow with rss and not waste your time.

Editing Circle for writing students
Territorial News for keeping up with the doings of Jean Lorrah and Jacqueline Lichtenberg
Lists For You - handy checklists such as 10 Things That Belong In The Trunk Of Your Car
Geezer Chick Staying fit past 60, means learning a lot of new and modified exercises and doing everything possible to maintain an active sex life.

Each of these is a "magazine" with an "editorial slant" and a "beat" to cover.

I'm a Science-fiction Romance writer. I look at History (which repeats itself) also current events, and I wonder What If...?

Not that I write it, yet, but Steampunk is where the writer changes one invention from the time of the industrial revolution, such as H.G. Wells's "The Time Machine". That was the "age of steam", hence steam punk.

More recently, there is "cyber punk" which I suppose relates to choices made in Silicon Valley in the 1980s. One of the hallmarks of punk writing is that it explores the road not traveled and the consequences of a different decision whether made by a scientist, a businessman, or a politician (I assume).

I'm using "gunk" punk because if steam is what the Nineteenth Century machines are remembered for, then gunk might be what petroleum-driven cars leave behind. Or maybe I've been watching too many STP commercials. 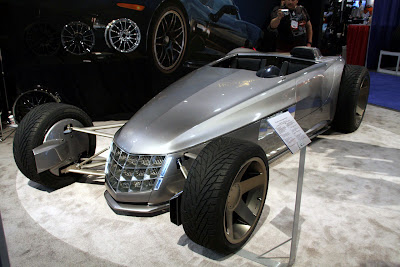 This is a car made by my husband, with his own hands and the help of a few people he contracted with privately. He burned his hands on hot clay, he came home with his eyebrows covered in dust from sanding... he lost 10lbs from all the exercise. This photo was taken at SEMA by Jonathon Ramsey for Autoblog.com http://tinyurl.com/5kv9jf


So, what if... in the 1940s American didn't have a manufacturing industry and depended on Germany and Japan? I'd probably be blogging in German, right?

History is being made right now, that's why I'm laying claim to "gunk punk" (unless someone has already thought of it, or someone has a better name). Peter M DeLorenzo of autoextremist.com
http://www.autoextremist.com/current/ may have done so, but he doesn't write fiction as far as I know. He has a jaw dropping rant going on. 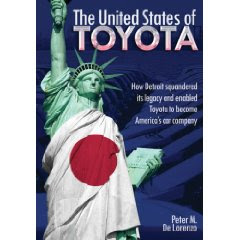 I am now imagining myself as a writer in, say 2020 (hindsight pun!) looking back on the third week of November 2008 when Congress made a catastrophic vote NOT to make a loan to the last American car companies.

It's a "Mad Max" world now. Or perhaps it's Mary Doria Russell's "The Sparrow" world with a touch of "1984". The Jesuits and the Japanese rule. We have an Emperor. And a Pope. And a third Minister of some sort, because good things come in threes.

America is bankrupt. When the world bank foreclosed, one of the creditors took Hawaii, another took the island of Manhattan, another took the Great Lakes for the water. No one wanted Detroit... I could go on. In a grim way, this is rather fun.

Maybe my imagination is overactive. I hope so! I was having trouble fitting any kind of Romance into my budding novel of milieu.

My point is, pay attention to the information that is available, and store it up for future reference. (Thank goodness for flashdrive!). There's a massive dissonance right now between the truth and what people are saying in the media.

If interested in GM's version of car myth vs fact visit http://gmfactsandfiction.com/

We give each other traffic.

If you are reading this page, please click the links....

Males and Other Animals

the hussies
sahara kelly and friends

Hope this is helpful!

Posted by Rowena Cherry at 11:08 AM No comments:

This is what we do:

We give each other traffic.

If you are reading this page, please click the links....

Males and Other Animals

the hussies
sahara kelly and friends

Hope this is helpful!

Posted by RowenaBCherry at 2:57 AM No comments:

Today there are blogs instead of boards. But there are now social networking sites that are proving more than useful to some people.

I'm currently trying to become findable on linkedin.com as well as facebook.com -- I don't think I've signed onto myspace.com yet but I suppose I will eventually.

The essence of these developments is the way that large groups of people can talk to each other, like a big party room where everyone sits quietly and listens as one person says something relevant to what someone else just said.

Many of us read a lot of Regency Romances where authors try so very hard to convey the essence of what "making conversation" is all about. A good conversationalist was valued at these upper crust parties, and conversation was considered an artform.

That became entirely lost in our society starting perhaps as early as the 1950's when television invaded living rooms. Or maybe the 1920's when radio became the common household evening activity.

Somehow, today, while people are flowing away from reading novels, magazines and newspapers, the fine art of conversation may be in revival online in blogs and social networking.

True, when these facilities started out, the artform was so lost that general anonymous interaction gave rise to the phenomenon of the Flame War -- an emotional exchange characterized by hurling foul language mostly fraught with semantic loading and devoid of meaning.

However, today there are those who make money blogging because they have found the knack of expressing public opinion in a quotable way. These are the new journalists. They make news rather than reporting it.

I suspect the fine art of polite conversation won't be far behind this development, and it may be a blog just like this one that throws the spark onto the dry tinder of the internet.

http://www.aliendjinnromances.blogspot.com/ -- where I am currently posting chapters in a book on Tarot that does not yet have a publisher. Check Tuesdays.
Posted by Jacqueline Lichtenberg at 11:12 AM 2 comments:

LINKS to WEBSITES of interest